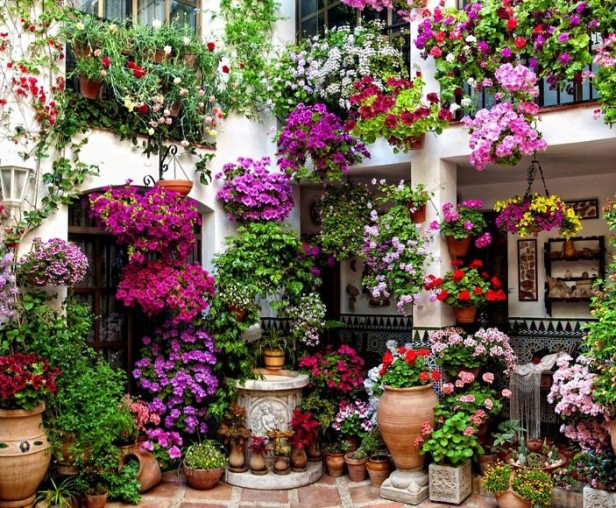 In 2012 UNESCO included the fiesta de los patios, that takes place in Cordova, in the list of Intangible Cultural Heritage. It takes place every year in May and lasts 12 days. In these days everybody is welcomed to visit the communal patios where visitants can appreciate the beauty of the plants that cover the walls from the bottom to the top. Neighbours and tourists gather in the patios, where everybody can enjoy flamenco dances and guitar playing. This fiesta is considered part of the intangible heritage of the city since it needs the collaboration between people from all sorts of backgrounds and it promotes ecology and sociability.

This tradition of covering the walls with plants started to keep homes cool in times of the Romans and it continued thanks to the creativity of the neighbours. Moreover, since 1921, a competition takes place between patios to decide which one is the best in the city. The jury values different types of flowers, how the owner has taken care of flowerpots and natural lighting. Nowadays this competition exists to motivate neighbours to continue with this tradition.

Strange as it may seem, this fiesta is advertised mainly through word-to-mouth but since it was included in the list of intangible cultural heritage of the UNESCO the number of tourists has increased. As a result, it’s very difficult to have the competition. This also affects the experience of the tourists since what we all seek is authentic experiences (Timothy and Boyd, 2006) and high numbers of foreigners coming to visit the patios doesn’t make it easy to achieve.

Although UNESCO’s intangible cultural heritage list is made so intangible heritage gets protected it’s true that most of the times it also implies increasing numbers of tourists visiting the places and usually the administration doesn’t know how to handle the number of visitors and keep the sustainability of the traditions. Furthermore, this can provoke the alteration of this traditions since they can’t be celebrated as they used to be.

Allen, A. (2013) ‘Patios as a Competitive Sport? It must be Córdoba’, The New York Times, 5 September, available at: http://www.nytimes.com/2013/09/06/greathomesanddestinations/patios-as-a-competitive-sport-it-must-be-cordoba.html (Accessed: 16 October 2017)

Sharma, R. (2017) ‘The secret behind Spain’s most beautiful fiesta revealed’, The Independent 16 May, available at http://www.independent.co.uk/travel/europe/cordoba-fiesta-de-los-patios-dates-may-andalusia-what-to-see-a7737426.html (Accessed: 16 October 2017)